CRYPTOZOOLOGY ANTHOLOGY has been released – along with the Kraken! 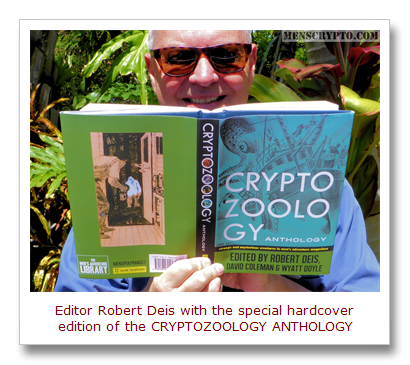 I’m happy to announce that the lushly-illustrated, full-color paperback and hardcover editions of our CRYPTOZOOLOGY ANTHOLOGY are now available to order on Amazon.com – worldwide.


They are also available on Barnes & Noble and other major online bookstore sites.

A full color ebook version will be available in the near future.

The covers of all three formats feature artwork from a classic men’s adventure magazine story that’s included in all editions: “The Reckless Ones,” by the great Arthur C. Clarke.
It was originally published in the October 1956 issue ofADVENTURE and is proudly reprinted by us with the approval of the Arthur C. Clarke estate.

It’s one of Clarke’s “Tales from the White Hart” stories, which are known for their sly humor and surprise endings.

As Denver Gillen’s awe-inspiring illustration for the story shows, “The Reckless Ones” is about a giant squid, the aquatic monster that was once called “the Kraken.”
In 1957, Ballantine published a collection of Clarke’s White Hart stories. That book includes “The Reckless Ones” (under the title “Big Game Hunt”). But we suspect few modern readers, other than serious Clarke buffs, have seen it. 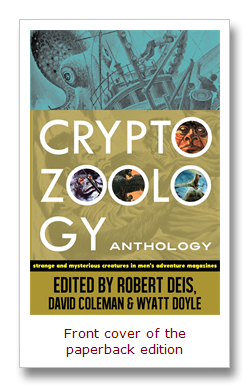 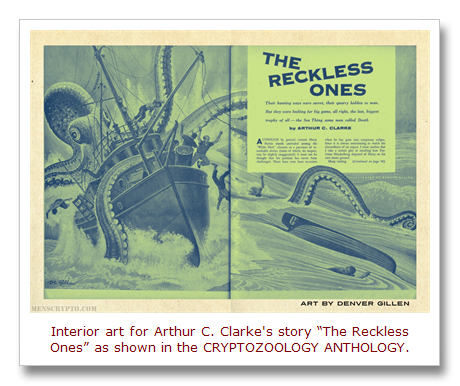 That – and the fact that men’s adventure magazines played a major, but little-known role in creating awareness and popular conceptions of Bigfoot, Sasquatch, the Loch Ness Monster and other legendary monsters – make theCRYPTOZOOLOGY ANTHOLOGY a unique addition to realms of books about both cryptozoology (the study of unknown or hidden animals) and post-WWII men’s pulp adventure magazines.

The book opens with an introductory chapter written by cryptozoology and film maven Dave Coleman. It’s titled “That Fondness for the Marvelous So Common to Mankind...” – a quote from an early nineteenth century report about the fascination many of us have for tales of mysterious monsters. 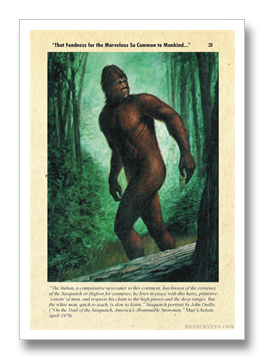 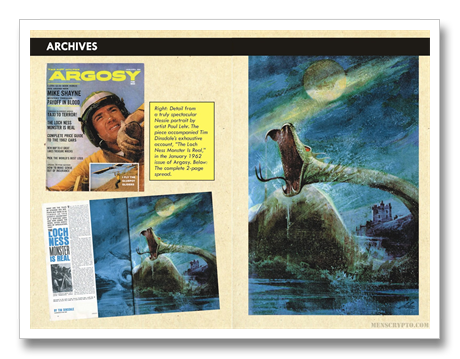 Among other things, Dave is the author of THE BIGFOOT FILMOGRAPHY, the authoritative guide to movies about man-like “Hominid cryptids”, as well as the eerie cryptid-themed novel ANCIENT LAKE.

He also recently launched the Roku Channel Acolyte Cinema, a cornucopia of cult films, quite a few of which are rarely-seen gems about Bigfoot, Sasquatch and other crypto creatures.

There is also additional contextual background provided throughout the book by me and my regular co-editor and publishing partner Wyatt Doyle, whose other recent projects include publishing a new edition of Josh Alan Friedman’s critically acclaimed book TELL THE TRUTH UNTIL THEY BLEED and co-writing the script for the Lionsgate horror film DEVIL MAY CALL with director Jason Cuadrado.

As usual, Wyatt did the graphic design work, as he did for our previous men’s adventure story anthologies: WEASELS RIPPED MY FLESH! and HE-MEN, BAG MEN & NYMPHOS. 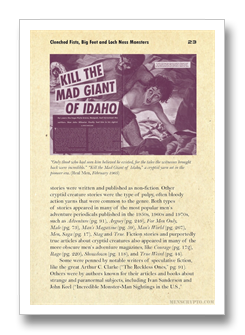 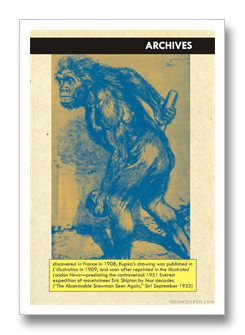 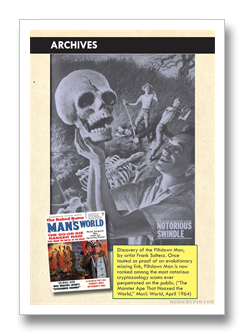 I especially love the way Wyatt used the original artwork from the magazines in both the stories and the special “Archives” pages that show cryptozoology-related artwork from stories that aren’t in the anthology (but may be included in a future volume).

I’ll focus on some of the stories in the CRYPTOZOOLOGY ANTHOLOGY in more detail in future posts on this blog. In the meantime, here’s a brief overview, using scans of actual pages in the book…

Scores of stories about the best-known Hominid cryptids – Bigfoot, Sasquatch, and the Yeti, or Abominable Snowman – appeared in men’s adventure magazines. 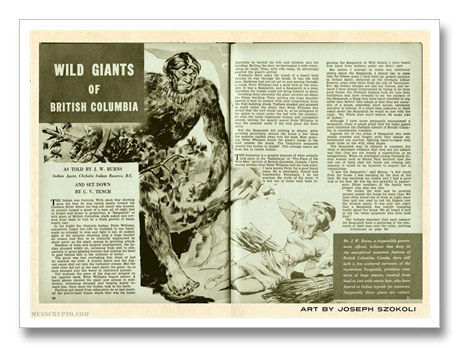 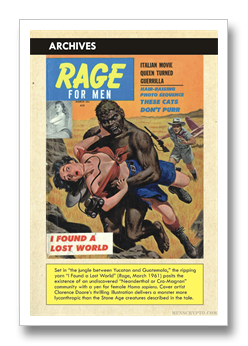 The Hominid cryptids stories we chose, like others in the book, either have historical significance in the realm of cryptozoology lore or are especially good men’s adventure magazine yarns, or both.

For example, the first story in the book is “Wild Giants of British Columbia.” It was written by Canadian Indian Reserve Agent and teacher Arthur A. Dunn, the man who actually coined the term “Sasquatch.”

It was published as a true account of stories local Indians told him about Sasquatch in the September 1948 issue of SIR!,when that magazine was paving the way for the men’s adventure genre that took full form in the 1950s.

Other stories exemplify popular portrayals of famed Hominid cryptids over the next few decades. 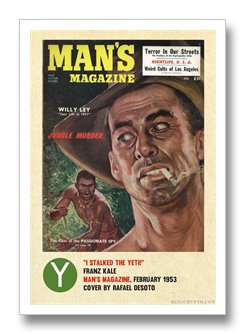 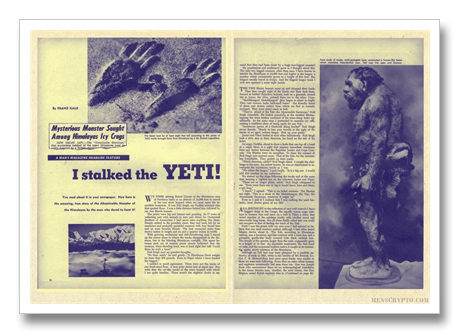 There’s “I Stalked the Yeti!” from MAN’S MAGAZINE, February 1953, “A Man From Another Age” from MAN’S ILLUSTRATED, August 1959 and “I Encountered the Abominable Snowman” from RAGE, September 1960.

Those are all ripping yarns (in more ways than one) that portray the Abominable Snowman as a dangerous man-killer. 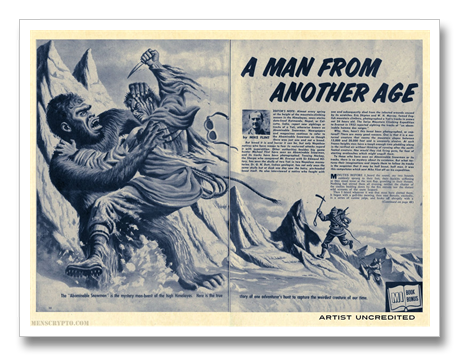 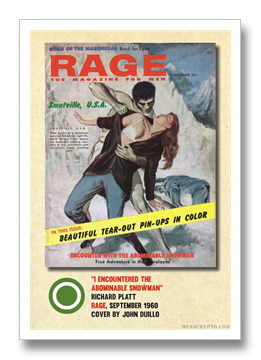 At the other end of the spectrum is “The Stone Monster” by A.M. Lightner (the pseudonym of science fiction writer and naturalist Alice L. Hopf), from ARGOSY, November 1963. It features a more peaceful Yeti who befriends a human when they are trapped together in an ice crevasse and must work together to free themselves.

Several other stories focus on the American relatives of Sasquatch and the Yeti. Two of them are action/adventure style stories: “Hunt for the Half-Man, Half-Ape of North America” from MEN, November 1969 and “Face to Face With the Ape-Man Monster of Tennessee” from MAN’S WORLD, October 1973. 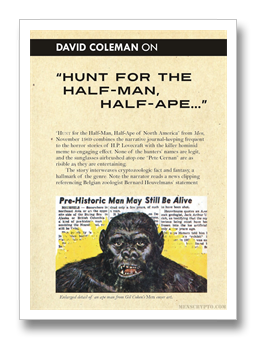 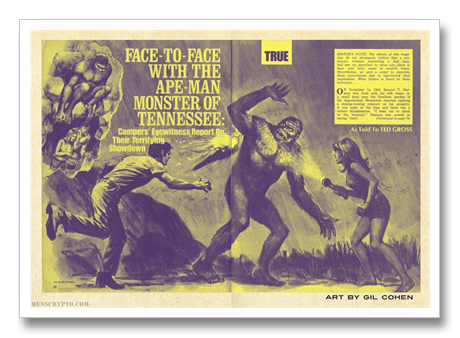 Another, from MALE, August 1970, has special significance for cryptozoology buffs. It’s titled “Incredible Monster-Man Sightings in the U.S.”

It was written by John A. Keel, the famous (and somewhat infamous) author of a series of popular books about strange creatures, UFOs and paranormal subjects.
Keel is best known for his 1975 book, THE MOTHMAN PROPHECIES, the which inspired (among other things) the spooky 2002 film starring Richard Gere and a recent episode of the TV series MONSTERS AND MYSTERIES IN AMERICA.
Yet another story we included that has historical significance is “Monster Bird That Carries Off Human Beings!” by Jack Pearl, from the May 1963 issue of SAGA.

If you Google that story you’ll find that it is widely credited with generating modern awareness of legends about a huge flying cryptid called the Thunderbird and for inspiring a wave of other stories and books about giant birds. 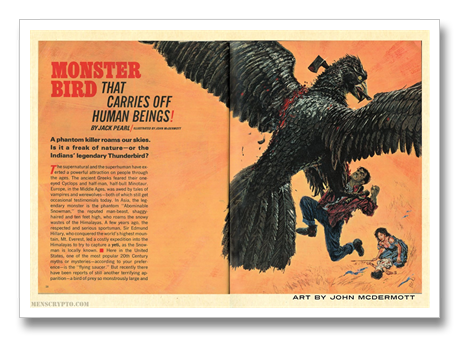 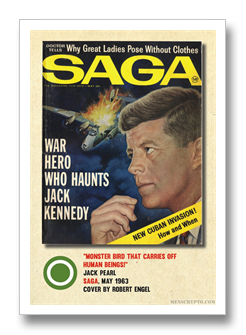 Some cryptozoology mavens, like Loren Coleman, have theorized that the Mothman monster was a Thunderbird. (Loren – one of the world’s leading cryptozoologists, a prolific author and founder of the International Cryptozoology Museum – is not related to our co-editor Dave. But they are friends and Dave includes some enlightening quotes by Loren in his introduction to our new book.)

Not all of the creatures featured in our CRYPTOZOOLOGY ANTHOLOGY are warm blooded. We also included stories about giant lizards, sea monsters and lake creatures.
One is “‘Fish’ With Human Hands Attacked Me!” from the November 1955 issue of TRUE WEIRD.

TRUE WEIRD was one of the idiosyncratic men’s adventure magazines published by the enterprising bodybuilders and publishers Joe Weider and his brother Ben Weider (the “Brothers of Iron”). 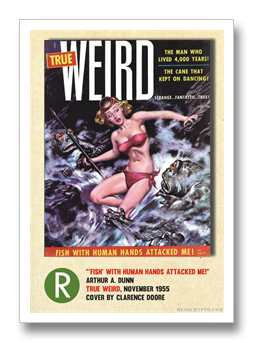 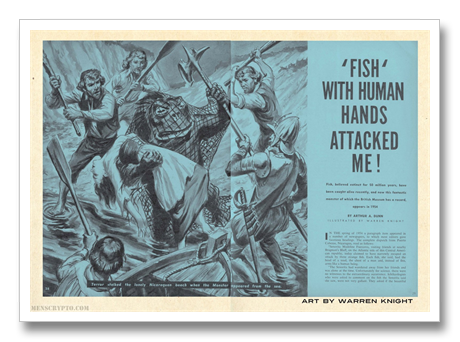 As befits the name of the magazine, “‘Fish’ With Human Hands Attacked Me!” is portrayed as a true historical account. It’s also truly weird. And, the cover painting that goes with it, by Clarence Doore, is totally gonzo.

Two other stories we included about giant reptiles are rip-snorting action/adventure yarns.
One is a kaiju style tale about a resurrected dinosaur who is encountered by a hapless oil drilling crew. Titled “The ‘Thing’ at Dutchman’s Rig,” it comes from the November 1958 issue of the obscure men’s adventure mag SHOWDOWN. 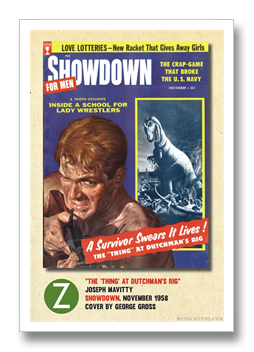 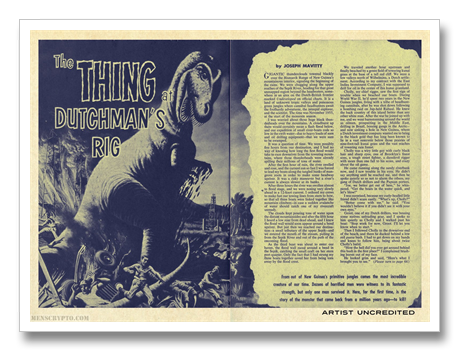 The paperback and hardcover editions of our CRYPTOZOOLOGY ANTHOLOGY also include a special “hidden” story that’s not listed in the Table of Contents. We decided that was fitting, since cryptozoology is literally the study of unknown or hidden animals. (Derived from the Greek words crypto, meaning unknown or hidden, zo meaning animals, and ology, meaning “the study of.”)

The special limited edition hardcover version includes even more bonus artwork and an additional story – a wild “true story” from HIS magazine about 300-lb. ape-human hybrids created to fight in wars for Communist countries and tested during the Korean War. 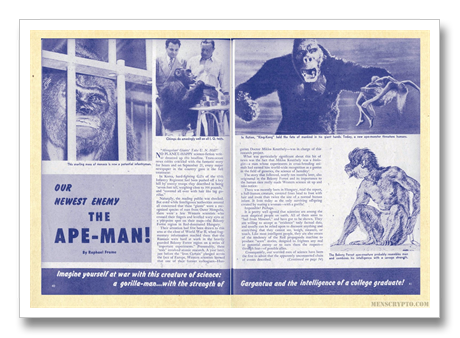 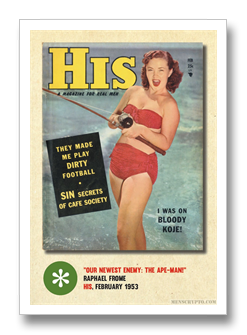 The page scans shown in this post only provide a partial look at what you’ll find in our CRYPTOZOOLOGY ANTHOLOGY. We think it’s a worthwhile addition to the body of literature about both cryptozoology and men’s adventure magazines. Of course, it’s also just damn cool, if I do say so myself.

If you buy a copy and agree, we hope you’ll post a review on Amazon or B&N, or on the pages of one of the cryptozoology Facebook pages, such as MONSTERS, MYSTERIES & MAYHEM.

In the meantime, as cryptozoology buffs say, keep it Squatchy!
Posted by New Texture at 5:35 PM No comments: 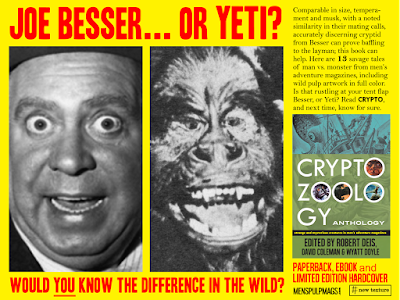 Cryptozoology Anthology, NOW in paperback and limited edition hardcover!
Posted by New Texture at 12:02 AM No comments: cryptozoology (n.) The search for and study of animals whose existence or survival is unsubstantiated or in dispute, such as Sasquatch, the Loch Ness Monster, fish with human hands, the Yeti, the Thunderbird, the Ape-Man Monster of Tennessee, and the 'Thing' at Dutchman's Rig.

For three decades, when American men had questions about the Yeti, the Loch Ness Monster, Bigfoot, and other weird beasts from the strange world of cryptozoology, they found answers in the hard-hitting pages of men's adventure magazines.

This latest installment in the Men's Adventure Library is edited by Robert Deis of MensPulpMags.com, David Coleman (The Bigfoot Filmography) and Wyatt Doyle (Stop Requested), and includes contributions from luminaries such as Sir Arthur C. Clarke, John Keel, and many others.

Cryptozoology Anthology is packed with 13 biting tales of creatures notorious and obscure, and the limited hardcover includes bonus material exclusive to that edition, including an additional wild story rescued from obscurity. Don't leave civilization without it!

Available NOW in paperback and limited edition hardcover!
Posted by New Texture at 10:19 AM No comments: